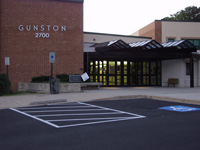 When searching in your preferred navigation app, please be sure to search for “Gunston Arts Center, Theatre Two” not “Dominion Stage” as we use multiple locations in Arlington and various navigation apps will show us at different locations.
Gunston Theatre Two is located at Gunston Middle School. When you drive into the school complex please turn to the right and away from the soccer fields. There is ample parking at Gunston Theatre Two. The entrance to the theater is around the back of the building as you move counterclockwise around the building. Look for the neon signs above door #3.

(See picture of the theatre entrance to the bottom left)

This acclaimed drama by August Wilson, directed by Rikki Howie, is the ninth of Wilson’s acclaimed ten-play American Century Cycle. Set in the Pittsburgh Hill District of 1985, this Tony nominated play tells the story of King Hedley, an ex-con attempting to rebuild his life by starting a family and selling stolen refrigerators so he might eventually buy a video store. The play comments critically on the supply-side economic theories of the day, examining whether their stated aim of providing trickle-down benefits to all Americans truly improved the lot of urban African Americans.